The Western Australian State Stamp and Postcard Exhibition
will be held at the same time & in the same venue as the
MANDURAH 2016 FAIR
STAMPS, COINS, BANKNOTES & POSTCARDS

REGULATIONS:
These Regulations are based on the APF Regulations for Australian Philatelic Exhibitions.

CONDITIONS OF PARTICIPATION:
Participation in the Exhibition is open to all exhibitors resident in Australia whether they are members of affiliated organisations or not.

The exhibitor must be the bona-fide owner of the exhibit. Exhibits cannot be entered in joint names except for the Literature Class, and husband and wife entries.

Each entry must be made in the correct class. If considered necessary, the Jury may transfer an entry to another class. Non-competitive entries will be by invitation of the Committee only.

The exhibitor must provide a draft of the title page of the exhibit to the Organising Committee no later than 20th August, 2016.

* Judges will take into consideration the three eras of Traditional Philately, namely Classic, Intermediate and Modern (State Rules definition of Modern is from 1966 to present day).

Each division will have separate conditions that apply. The Club Class and Junior Trophy Class differ significantly from the other classes and special regulations have been detailed in a separate part of this prospectus.

APPLICATIONS:
Applications from exhibitors will only be accepted on the official entry form and within the appointed time. All entries must be forwarded to the Exhibition Secretary, GPO Box 9800, Perth WA 6001.

The closing date for entry forms is 20th August 2016 and entries must be accompanied with a draft of the title page.

•   All exhibits must be mounted on white or light coloured sheets within the range 21-24cm by 26-28.5cm including the size of the protectors. An exhibit mounted on black or dark coloured pages will not be accepted.

Oversize sheets will be mounted only if prior approval of the Committee has been obtained.

Sheets for each exhibit must bear the name and address of the exhibitor on the reverse of each sheet and be numbered consecutively in the order they are to be mounted. Only pages for display can be submitted.

•   State Class exhibits must consist of 2 to 5 frames. An exhibitor may submit any number of competitive exhibits, but no more than one entry of the same country or subject in the same class if of a similar or continuing nature.

Where an exhibitor submits multiple entries (excluding literature), the preferential order for acceptance should be indicated.

DELIVERY OF EXHIBITS:
After paying the entry fee, the exhibitor will receive notification of frames allocated and an envelope for each frame of 15 sheets.

Each sheet should be placed in a lightweight transparent sheet protector, with only one side open. The transparent protector must not exceed the exhibition sheet by more than l cm all round. Sheets received without protectors will not be accepted.

Certificates of expertisation (where applicable) shall be placed on the reverse of the relevant sheet inside the sheet protector.

Exhibits sent by mail must be forwarded pre-paid to the Exhibition Secretary, GPO Box 9800 PERTH WA 6001.

PLAN OF THE EXHIBIT:
All exhibits should have an introductory page or plan to indicate what is being shown and give guidance to the viewer, including areas of special interest.

Entries in Class 1.4, Thematic Philately, must include a plan of the exhibit.

PHILATELIC LITERATURE ENTRIES:
Two copies are required, one of which will be available for inspection at the Exhibition. One copy will be returned after the Exhibition if sufficient postage/instructions have been provided; the other will be deposited in a Philatelic Society library.

Any book, catalogue, series of magazines or newsletters published after January 1st 2012 can be exhibited.

SECURITY AND INSURANCE:
The Committee will take reasonable care of the exhibits with which it has been entrusted. However, it declines all responsibility in case of loss, theft or damage during conveyance to/from the Exhibition or at the Exhibition.

Exhibitors are advised to arrange adequate insurance themselves.

MOUNTING OF EXHIBITS:
Upon receiving the exhibit, the Organising Committee will issue a receipt, which must be produced after the Exhibition to obtain the exhibit. All exhibits will be mounted and removed from the frames in accordance with instructions given by the Bin Room Manager.

Personal mounting and removal can only be done with the express permission of the Bin Room Manager and according to their directions.

No exhibit will be released after the exhibition until checked by the Bin Room Manager.

JURY:
The members of the Jury will be approved by the Western Australian Philatelic Council. The decisions of the Jury are final and cannot be contested.

Jury members, apprentice jurors and consultants to the Jury cannot compete in the competitive classes.

Youth entries will be judged in the following age groups (as at 1st January 2016): up to 15 years, 16-18 years and 19-21 years. A separate judging panel will be selected for the Club Class and The Arthur Holmes Junior Trophy Class.

EXCLUSIONS:
The Jury shall penalise exhibits containing forgeries or reproductions not so described.

MODIFICATION:
For the duration of the Exhibition, no exhibit may be either modified or withdrawn. Exhibitors are reminded that the rules of the APF stipulate that once the Organising Committee accepts an application form, it is the responsibility of the exhibitor to produce the exhibit.

Failure to give notice or produce the entry is subject to penalty by the APF and in either case the entry fees will not be returned.

Perpetual trophies are available to be awarded for the best introductory or title page(s) and to the best thematic exhibit. A judging slip and written critique will be returned with each entry.

State Competitive awards and Cygnet Class awards will be given according to the following terminology and points.

RECOGNITION OF EXHIBITION REGULATIONS:
By signing the application form, the exhibitor is bound by these Special Regulations for the SRSS 2016 Exhibition.

JUDGING CRITERIA:
The judging criteria that will be used by the Jury for State Classes will be those of the Australian Philatelic Federation.

State Youth exhibits are judged with specific criteria for different age groups, details of which can be obtained from the WAPC.

A different method of evaluation will be used for Club Class and Junior Trophy Class, details of which are given in the Special Regulations.

OPEN CLASS:
Exhibitors are advised that the State Exhibition includes “Open Class”. There are Special Regulations for Open Class including a different marking structure.

An Open Class exhibit develops a subject according to the choice of the collector, giving him/her almost total freedom to arrange it with the only limits, being:
•   Philatelic material will cover approximately 50% of the exhibit
•   The non-philatelic material will be no thicker than 5mm to fit into the standard exhibition frames.

The judging criteria for Open Class are as follows and will be judged by the Philatelic Jury:

SUBJECT CLASS:
The intent of this class is to provide collectors with an opportunity to exhibit material that does not qualify under the Traditional or Thematic classes.

There must be a connection between the items in a Subject Class exhibit. The connection is to be via the subject shown and not as a thematic theme or as the country.

The judging criteria are similar to the Traditional class, as follows:

CYGNET CLASS:
Cygnet one frame exhibits can comprise any of the State classes.

POSTCARDS CLASS:
Postcard exhibits will be evaluated using the APF guidelines. Marks will be awarded according to the schedule below: 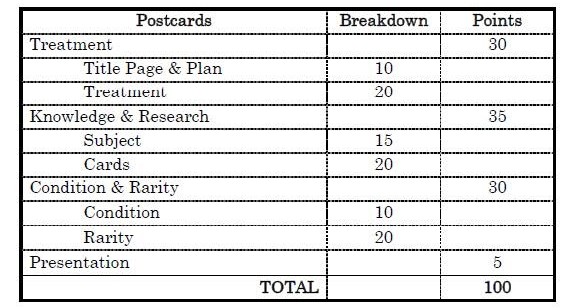 ENTRANTS:
•   Open to WA residents only.
•   Must be members of a WA philatelic society or club (or reside more than 50km from a society if resident outside the metropolitan area).
•   The entrant enters on behalf of themselves and his/her society (members of more than one club should nominate the club for which they are entering).
•   Any exhibitor who has been awarded a silver medal or higher at State level is not eligible to enter Club Class.

ENTRIES:
•   Maximum 15 pages (one frame; can have fewer than 15 pages)
•   Any type of exhibit in any philatelic classification, including Social Class.
•   An exhibit which has been previously entered in either State or Cygnet Class may not be entered in Club Class.

AWARDS / JUDGING:
•   Winner plus one runner up.
•   NO level awards of any type will be given.
•   Perpetual trophy for the winner’s club.
•   A certificate of appreciation will be awarded to each entrant.
•   The judging will be carried out by a combination of a panel of adjudicators (who will be selected specifically for the Club Class) and visitors to the exhibition.
•   The points awarded by the Panel and the visitors will be applied 50% each to the final result.
• Visitors’ Votes: Visitors to the Exhibition will each be given a voting slip and asked to nominate one winner and one runner-up.
• The final result will be determined using a method that combines the relative positions of the Panel assessment and visitors’ votes.

JUDGING GUIDELINES:
The judging criteria to be used by the Adjudication Panel are as follows:

•   Neither rarity nor importance of the material will be considered in the assessment.
•   No written critique or marks will be given to the exhibitor.
•   Exhibitors will be able to discuss the entry with a member of the panel at the frame.

ADJUDICATION PANEL – JUDGING:
Judging will be done at the frames at the Exhibition. The Panel will comprise:
•   One member of the jury selected for the State exhibits.
•   The President of the Western Australian Philatelic Council or a nominated representative.
•   A non-philatelist, from an area of visual or verbal communication such as a journalist or artist (to be selected by WAPC).

The regulations for ARTHUR HOLMES JUNIOR TROPHY CLASS are the same as for CLUB CLASS with the following exceptions:
ENTRANTS:
Open to all WA residents (need not be a member of a club)
•   Maximum age 16

ENTRIES:
Maximum of five pages (one row in a frame; can have fewer than five pages).

JUDGING GUIDELINES:
The judging criteria to be used by the adjudication panel will be as follows:

•   Judging will take into account the age of the entrant.
•   The value of the material will not be considered in the assessment.

VISITORS VOTES:
Visitors to the exhibition will each be given a voting slip and asked to nominate one winner only.
•   The WAPC will note the age of the exhibitor on each exhibit to assist visitors in their selection.

ADJUDICATION PANEL:
The Youth Coordinator will be the WAPC representative on the Adjudication Panel.