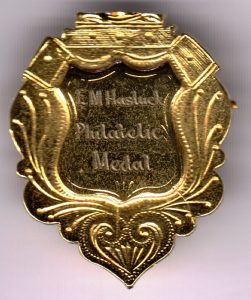 In September 1983, the WAPC established a philatelic award
known as the ‘E.M. Hasluck Medal’ in memory of the late E.M.
Hasluck and his fellow officers serving in the Colonial Post Office of Western Australia in the 19th century. In particular, the Award acknowledges the contribution of Hasluck and others to Post Office and Telegraph services during the Gold Rush era.

The WAPC appointed five trustees to administer the annual
selection of a worthy recipient of the Award.

Nominees should be persons resident in Western Australia who have given distinguished service to philately, past and present.

Nominees are selected based on considerations such as: